The Mechanical system of our whole MSL robot is subdivided into five main modules: the base frame, the ball handling mechanism, the electromagnet shooting system, the omnidirectional vision system and the front vision system, as illustrated in Fig.1a For the goalie robot, the ball handling mechanism, the electromagnet shooting device and the front vision system are removed, instead two RGB-D cameras are integrated as shown in Fig.1b.Each modules has its specific function.The base frame is a 4-wheel-configuration platform which can move in all direction and generate more traction force than a normal 3-wheel-configuration one.The each side of the ball handing mechanism contains a wheel, a DC motor, a set of transmission bevel-gear, a linear displacement transducer and a support mechanism. It enables the robot to catch and dribble a ball during the game.The electromagnet shooting system can be subdivided into three categories: spring mechanisms, pneumatic systems and solenoids.It enables the robot to pass the ball and shoot. The omnidirectional vision system which is composed of a convex mirror and a camera pointing upward towards the mirror not only makes the imaging resolution of the objects near the robot on the field constant and the imaging distortion of the objects far from the robot small in the vertical direction, but also enables the robot to acquire a very clear image of the scene which is very close to it, such as the robot itself. The front vision system and the RGB-D camera are auxiliary sensors for the regular robots and the goalie robot, respectively. 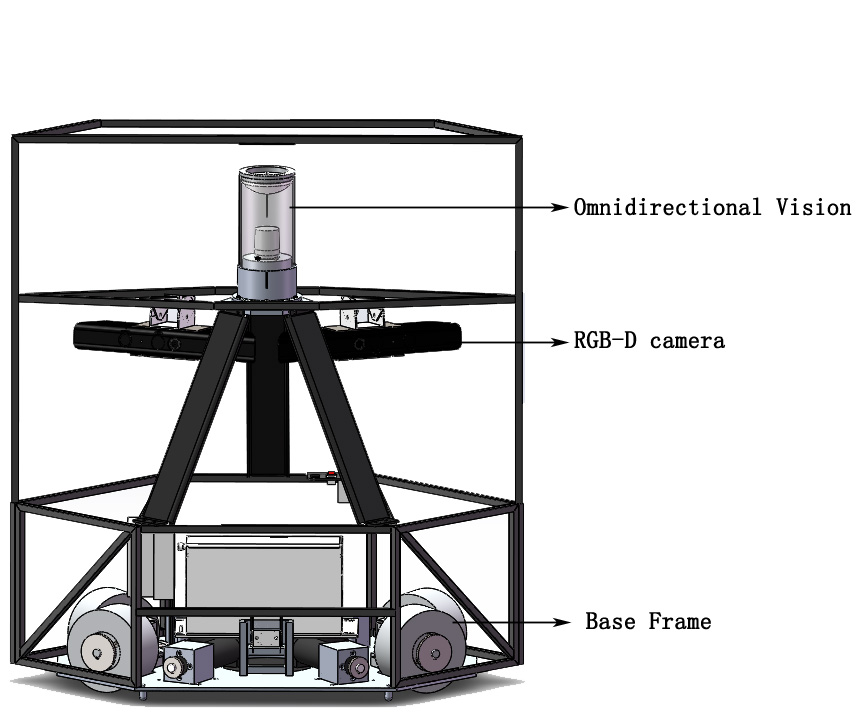 Our current electrical system uses PC-based control technology as shown in Fig 2,so that all vision and control algorithms are processed on the industrial PC. The industrial PC communicates with the EtherCAT system via Ethernet. In addition,the system also uses Elmo Motion Control (SOL-WHI 20/60) which is the intelligent miniature digital servo drive for the 150W DC brushless motor, the CANopen modular EL751 embedded in the EtherCAT which is used to realize communication between the industrial PC and the Elmo Motion Controls, the kicker driver,also named as shooting module, which is mainly composed of a relay and an IGBT FGA25N120ANTD. The PC can send control signals to the kicker driver for shooting or passing via the EtherCAT. The system can meet the demands of the RoboCup MSL competition and provide a good solution for the design of an intelligent robot. 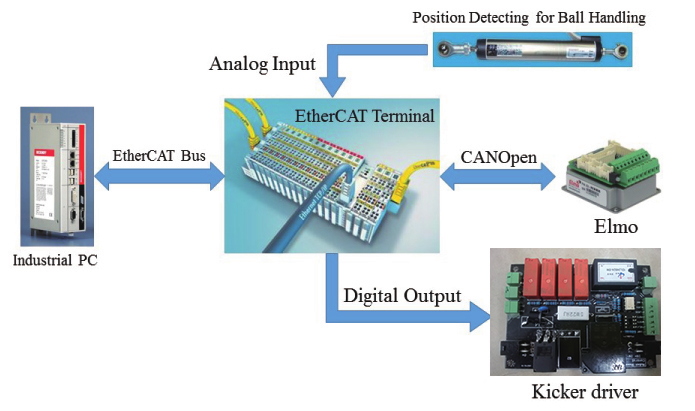 3.Software based on ROS: Fig.3 The software framework based on ROS